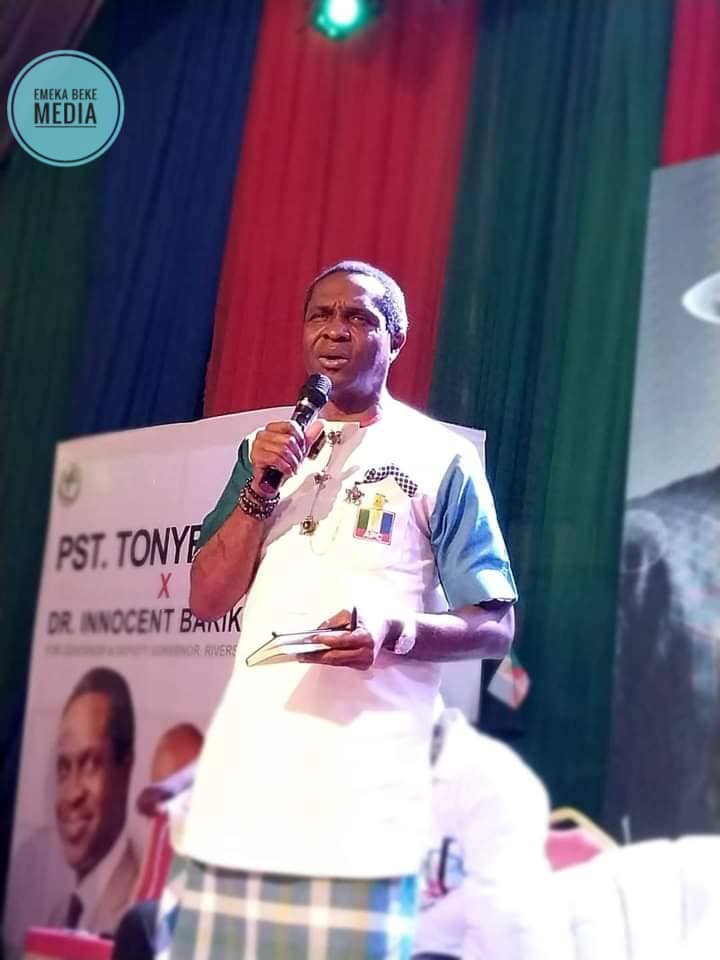 Rivers APC Gubernatorial Candidate for 2023 Governorship Election, Pastor Tonye Patrick Cole has assured APC members that when he assumes office in May 2023, he will not be a sentimental Governor but will carry everybody along. Speaking during his Manifesto / Inauguration of the State Election Campaign Council, Tonye cole stressed the need for unity across party line to deliver the will of the people which includes : good governance , accountability, transparency etc.

He said ” You all know, I am not coming for Governor because I need fame or connection , because I got fame at a young age , I have also shared podium with Presidents and heads of states at different times and levels. I want to lead this state because i want to serve our people . Take the flood situation for example , our people have become so used to the suffering , and are already looking forward to next year’s flood which is bad, … for us to win, we must work as a team with all hands on deck. Ask the other party what they are scared of that is making them try to stop us using the courts , I am sure the court will do what is right”.

In his goodwill message , the Leader of the party Rt Hon Chibuike Rotimi Amaechi, assured members of Rivers APC of victory in the forthcoming polls . He stated that , members of the APC and Rivers people have suffered in the hands of the present Government and that will only end when Tonye cole assumes office in 2023. Hon Amaechi Promised to be part of the process and lead from the front from LGA to LGA . His words ” the Governorship of Rivers State is in your hands , by the poll it shows even without campaign we have good rating , we all need to go back home and work for our victory , everyone that knows my history, knows I don’t succeed without travails “.

Chief Emeka Beke while inaugurating the Tonye Cole campaign council as headed by Chief Micheal West, stressed the need for strength and hard work irrespective of intimidation from the ruling party . He further said there is no need to cower in fear as God is with the party.

The Director General of the council, Hon Micheal West in his acceptance speech on behalf of the team, said him and his directors with those working with them will do all they must to deliver Pastor Tonye & Dr Innocent Barikor as Governor and Deputy respectively. He said ” the campaign will be issue based and the mission is to deliver Rivers people, telling them what we will do for them”.