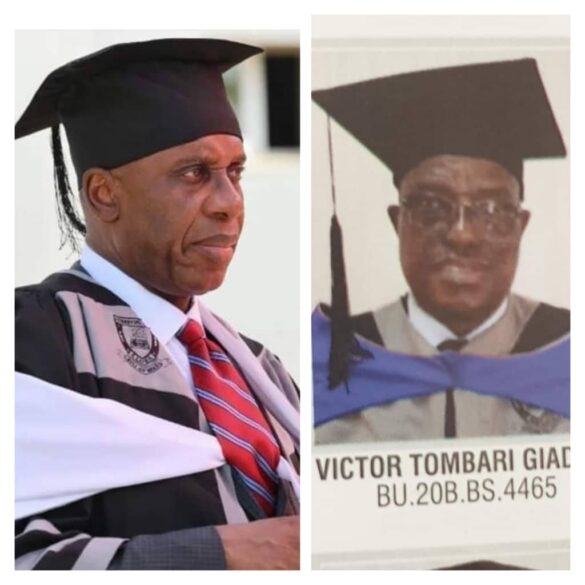 Describing the former Rivers Governor as a role model for everyone striving to achieve greatness, Eze said his doggedness and sense of commitment to whatever he sets out to achieve is inspiring and should be recommended to Nigerian youths as a daily pill to sustain them in their daily struggle to get to the height of their goals.

In a statement made available to media houses in Port Harcourt, the party Chief said enrolling in school and graduating at an advanced age and after much achievements and exposures can only be accomplished by a very disciplined and serious seeker of knowledge like Amaechi who strongly believes that learning never ends and seeking knowledge is a daily routine.

According to him, Rt. Hon. Amaechi has acquired Bachelor of Arts (BA) in English Studies, Master of Arts in African Literature and LLB in law. Currently the former Minister is an LLM Student in Corporate and Company law at Kings College London and will soon be enrolled in the Nigeria Law School where a successful completion of the One-year program will see him enrolled to the Nigerian Bar as a Barrister and Solicitor.

Addressing the narrative peddled by mischief makers that Gov. Amaechi purchased the Law Degree, Eze agreed to the extent that he purchased it with hardwork, dedication to studies, commitment to class activities and punctuality to class all of which virtues make a serious student.

Speaking to the press in Abuja, Amaechi said contrary to claims in some quarters that he bought the Law degree certificate, he actually worked hard for it.

He said throughout the duration of the programme, he was dedicated to his studies, disclosing further that even as a minister, he was always ahead of lecturers and students in punctuality, a development he disclosed made the Baze University to present him award for deligence and punctuality.

Eze congratulated Rt. Hon. Amaechi and Chief Victor Giadom for being role models to ardent seekers of education and knowledge and wished them well in future endeavors even as he prayed God to give them the supernatural enablement to break new grounds especially as the former Governor and Minister has always done.