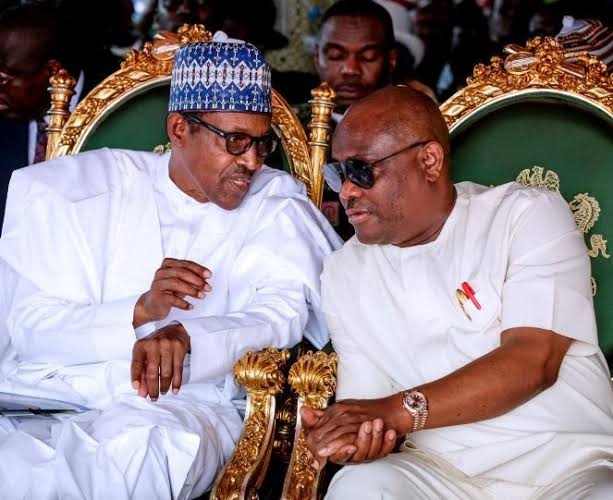 Chieftain of the All Progressives Congress (APC) and erstwhile National Publicity Secretary of the defunct New People’s Democratic Party (nPDP), Chief Eze Chukwuemeka Eze, has expressed displeasure over plans by the Federal Government to bestow an infrastructure award on the Governor of Rivers State, Nyesom Wike.

In a statement in Port Harcourt, he said he read with misgiving the report titled, “Buhari to confer infrastructure award on Wike Oct. 21” by one of the leading national newspapers in Nigeria stating that, Rivers State Governor Nyesom Wike has been nominated for the “Distinguished Award in Infrastructure Delivery” at the forthcoming Nigeria Excellence in Public Service Award by the Federal Government.

The report went further to quote the Secretary to the Government of the Federation, Boss Mustapha, as stating that President Muhammadu Buhari will on October 21 present the award to the governor at the State House Conference Centre, Abuja.

In the statement made available to media houses in Port Harcourt, the party Chief said as a close watcher of Rivers State politics, member of the APC Legacy Projects Media Team and one of the key players and contributors to the formation of APC by virtue of his position as Spokesperson for the defunct nPDP which formed an integral part of the merger that gave birth to the APC, he feels embarrassed and emotionally tormented and troubled to learn that a government that almost caused him his life has concluded plans to honour a bigot whose only achievement in eight years is the erection of 12 over-bloated flyovers in Obio/Akpor, his home LGA and nothing more.

The cost of each of those flyovers, some of which are still at their elementary stages of construction, can build four to five flyovers in any part of the country. He said instead of the federal government to concern itself in the cascading corruption and siphoning of public funds through these needless white elephants, it is joining in the league of those fanning the embers of mediocrity by rewarding self-enrichment through public funds, stealing, graft, incompetence ethnocentrism, loud nepotism, sheer loquaciousness, and drunkenness.

Eze called on President Muhammadu Buhari to rescind the proposed award stressing that Governor Nyesom Wike, who has been hiding under the veil of a perpetual court injunction to evade investigation into the odoriferous corruption perpetrated under his administration, does not in any way merit such recognition.

In fact, SaharaReporters recently published that a source at the Rivers State Government House who spoke on Friday said millions of Naira was paid to some officials of the Office of the Secretary to the Government of the Federation, Boss Mustapha, to facilitate the award.

The source added that there was presently mass mobilisation of Rivers State people to Abuja to attend what he described as the fake award.

“The so-called infrastructure award to Governor Wike was bought through the office of the SGF. The SGF capitalised on Buhari’s lack awareness of his environment to grant him the fake award,” the source said.

“We have started mobilising many people from Rivers to attend the award. Millions of Naira exchanged hand between the governor and many people in the SGF office. Apart from Port Harcourt, Wike abandoned the rest of Rivers State.

“Forget all you read on pages of newspaper, they are all scam. He hasn’t paid teachers in months. Retirees are owed while the governor and his wanted accountant-general who he wants as successor stole billions of Naira.”

As government that is peculiar in fighting corruption, it will be unwise to have anything to do with a Governor that has myriad of corruption allegations on his neck, to the extent of honoring him with an award investiture after he had bribed FG officials with millions of Rivers money just to get what he does not merit as exposed by the Sahara Reporters.

As at today, the governorship Candidate he foisted on the PDP, Mr. S. Fubara, still holds sway as an employee of the state government (civil servant) and this is against the rule of neutrality in the civil service.

He neglected the Supreme Court judgment which de recognized Celestine Omehia as a former Governor, concocted a law, recognized him just to undo his predecessor, and all of a sudden, he has unmade the law to derecognize Omehia because the later has found for himself a political direction up north.

Everything he does is against the law yet he belongs to the Body of Benchers. This calls for question.

Eze added: “It is the resources of the state that is stressed here and this should be a source of concern to the federal government.

“If Wike should be honoured because he built 12 Flyovers within one major road in a Local Government Area, Obio-Akpor, then what award will the FG give to Governor Umahi of Ebonyi State who has built 16 flyovers scattered in almost half of the Local Government Areas in Ebonyi State? What Award are we to give to the Governor of Borno State, who, not minding the insecurity ravaging his state, is changing the face of Borno State. What about the Governors of Delta, a silent multi-sectorial achiever? What of the CRS State Governor who sees tomorrow, what award are we to give the Lagos State Governor whose inputs have surpassed all the inputs of the last Administrators of Lagos State.”

Eze said the proposed award has an obvious political undertone that has already been uncovered. “Maybe the award is to compensate the Rivers Governor for destroying the educational facilities and industries built by the administration of Amaechi and making Rivers State one of the capitals of poverty.

“Maybe the recognition is for depriving pensioners their due, after making sacrifices and putting-in decades of service to society, and subjecting them to abject poverty. Or maybe it is to applaud him for not building one industry to create jobs for the teeming unemployed youths in Rivers State and weaponizing poverty.”

The APC chieftain further asked, “Is the award to thank the Rivers Governor for killing industries such as the the Rumuosi syringe factory, the famous Songhai farm, the Buguma fish farm, the Tai Banana plantation, and several others which had thousands of Rivers people under their employ and yielded good revenue to the state?

“Maybe the award is to compensate him for abusing and insulting President Muhammadu Buhari at every given opportunity and for describing his government as one of the worst ever in the annals of history of this country.

“Is the Award to compensate him for all that he has done to slow down PDP in her drive towards 2023?

“Maybe the Award is to be given to him in order to lure him to APC after ensuring the destruction of APC in Rivers State.”

The said honour, Eze went on, should not be in recognition of the infrastructural revolution in Rivers State which exists in the figment of the imagination of bootlickers and praise singers because the flyover projects were carefully crafted to rip-off the state and her people.

That recognition should be halted, he demanded. “Sacrificing merit on the alter of mediocrity in the name of petty politics will lead us nowhere and will definitely not speak good of the country and the present government.

Awards are not only given for physical activity but also as pointer to moral models. University certificates are not only for grades obtained but for character.

For the APC-led FG to give award to a known enemy and bad influence who throws government money about for personal interest, it means President Buhari is being misled into endorsing corruption and immorality.

Eze noted that Wike in his quest to capture power in 2015 has done everything with his collaborators to destroy the APC in Rivers State, and has done the very things Buhari abhors. It can only be sad that same Buhari is manipulated into turning round to endorse such a man.

Eze therefore urged President Buhari to rescind the action and halt the award to Wike to save his name and integrity of most of our members killed in order for Wike to assume powers.

Eleme APC Campaign: Why We Did Not Use School Field, Oji Ngofa Reacts