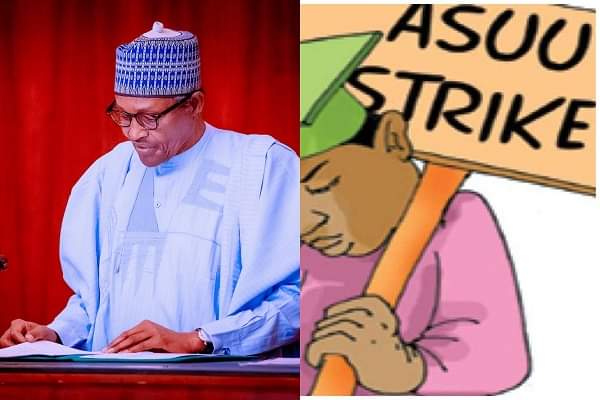 President Buhari said the government expects the staff of the universities to have a better understanding of issues in the country.

Buhari revealed that his government has made available over N450 billion in the budget to meet the demands in the lecturers going forward.

According to the president, it was becoming obvious that the government can no longer fund the education alone, adding that it was imperative to work out framework to fund the budget.

He stated that the government may no longer sign any agreement that it cannot implement.

True Blue Reporters recalls that for months, the Academic Staff Union of Universities have been on strike which led to the shutting down of all academic activities in public universities in Nigeria as series of efforts to resolve the issues with government has proved abortive.

It is still not clear when the ASUU strike will come to an end following the fact that politicians in the country are going into electioneering season.

Hope then is the hope of the students who are most affected. Their studies remains stopped as they cannot proceed pending the end of the disagreement between ASS and Federal Government