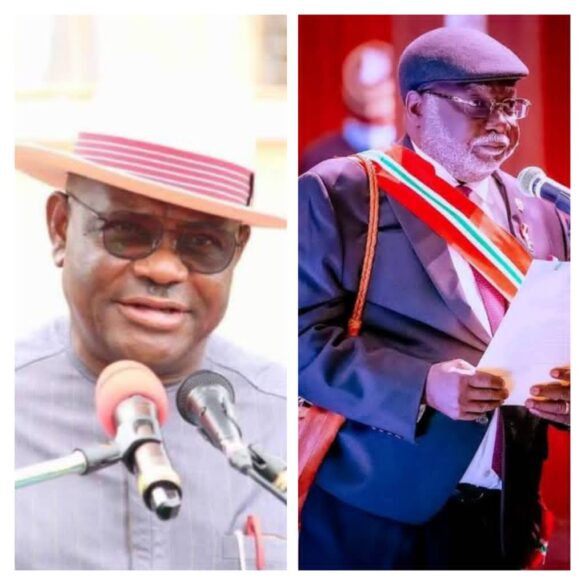 Chieftain of the All Progressives Congress and erstwhile National Publicity Secretary of the defunct New People’s Democratic Party (nPDP), Chief Eze Chukwuemeka Eze, says the Nigerian Judiciary (NJC) appears successfully coasted over and may be gradually being submerged in the murky waters of politics.

Speaking on the heels of the unhealthy rapport and irking frolicking between the Chief Justice of Nigeria, Kayode Ariwoola, and Gov Nyesom Wike of Rivers State and members of his circle now known as the G-5, Eze said it depicts of brazen misconduct and gross irresponsibility.

Eze said the G-5 which has split from the main opposition party – PDP – is a group of five Governors which has now been christened – ‘integrity group’, even when the catchphrase ‘integrity’ is more than a thousand miles away from the group and what it represents.

The media guru thus declared that for the CJN to openly declare support for a partisan group with such reckless impunity has put the integrity of the judiciary to question.

In a statement made available to media houses in Port Harcourt, Chief Eze said the CJN was caught in an inescapable web of partisan engagement in Port Harcourt, Thursday 24 November, 2022, during a dinner organized in his honor by the Rivers State Governor, Nyesom Wike, alongside the other Governors in his circle, including Gov Seyi Makinde of Oyo from whence the CJN hails.

Speaking at the ceremony, Justice Ariwoola openly identified with Gov. Wike and threw his weight behind his onslaught against the Presidential candidate of the People’s Democratic Party, and it’s National Chairman, Alh. Atiku Abubakar, and Sen Iyorchia Ayu. The CJN went further to express delight that his home-state Governor, Engr. Seyi Makinde, was part of the revolt against the PDP and former Vice President Atiku Abubakar.

Eze a member of APC Legacy Projects Media Team further referred that the CJN’s statement thus; “That is why we should not be scared to have these men of the integrity group. …and I am happy that my own Governor is among them because he would try to imitate his friend and in-law because we came here to marry for my Governor. So, Gov. Wike will always threaten that he will call back his sister if my Governor fails to play the ball. That is why you see him following His Excellency because my Governor is afraid of his wife being recalled.”

Enveloped by the luxurious fanfare which was a complete blend of frolic, wealth and waste, those are excerpts from the words of the CJN which represents an apparent affirmation of the inappropriate overture of Gov. Wike to the head of the Judicial arm.

Justice Ariwoola descended further to join the band of praise-singers and boot-lickers apparently, an action that raised suspicion from Rivers people who know too well what their governor does to force the endorsement of very important FG officers. The CJN spoke in a servile and obsequious manner.

Listen to him; “The things that Wike is bestowing to generations unborn will be hard to beat. That’s why he says it all. Any time he has the opportunity, he will say. Yes he would not be in office forever, but whatever time he has to spend in office, let it be spent very well.”

Eze said Justice Ariwoola seems to become more political than politicians and his public declaration of support for Gov. Wike justifies the weighty allegations of bias from different quarters to the extent that the judiciary is compromised especially in Rivers State where some Judges have continued to dish out very controversial judgments against the Rivers APC and its candidates in matters brought against it by Gov. Wike and the PDP in the state.

Many citizens had jumped for joy when they learnt the CJN was visiting the state, expecting he was to scold at the judges in Rivers State for apparently dishing out judgments like supermarket products. Instead, the opposite seemed to happen.

The said judgments which clearly contradict every known legal precedents and controvert extant laws on the subjects apparently given in exchange for bags of money stolen from public coffers are given in a bid to help deliver Wike’s handpicked guber candidate of the PDP, who is wanted by the Economic and Financial Crimes Commission (EFCC), Code of Conduct Bureau and even the FHC for various offenses of corruption against the Nigerian laws including misappropriation of state funds.

For instance, the ground on which the Federal High Court in Port Harcourt predicated its decision to disqualify Pst. Tonye Cole in a matter brought against him by the PDP is same as the one in suit number FHC/CA/CS/142/2022 where the Federal High Court in Calabar through an originating summons filed by the PDP and its guber candidate in Cross River seeking the disqualification of the APC guber candidate and his running mate in the state, held that dual citizenship is not a ground to disqualify a candidate in an election where the candidate is a Nigerian citizen by birth.

Similarly, it is settled that no political party has the locus to bring an action against the internal affairs of another political party and the court lacks jurisdiction to enquire into the internal affairs of a political organization unconnected to pre election matters brought before it by an aggrieved Member(s), but the court in Rivers State disqualified Tonye Cole and other candidates of the APC in a matter brought against the party and its candidates by Gov. Wike and the PDP on grounds of how it conducted its primaries.

Just yesterday, the Court Appeal, PDP v INEC & ADP & Ors., reiterated the position that a political party has no locus to challenge the primary election of another political party.

The party Chief called on the National Judicial Council and relevant bodies to swing into action and severe the Nigerian Judiciary from Gov. Wike’s corrupt political estate.

Chief Eze expressed confidence that with some good Judges still in the judiciary, the Rivers APC will be vindicated and restored to play its role in delivering the state from the shackles of corruption and mismanagement of the common wealth.

But while that is yet to take place, the CJN would be expected to reduce his exposure to notorious political characters that are being loathed by reasonable members of the society.

It would be shocking that the CJN would ignore the tradition of doing background checks on any person inviting him for a public show to avoid the odour that a lamb would acquire for sleeping with a goat. A little background check would have revealed to the CJN that while Gov Wike pumps billions to judges and judicial projects, he dishes out Executive Orders that shut down democracy and liberty in a part of Nigeria.

Endorsing such a state governor thus makes the CJN appear to have endorsed the attack of democracy.

All these plots against the Rivers State APC notwithstanding, Eze still believes that Wike and his faction of PDP will soon be history in matter of few months and APC candidates will not only be in the ballot but will recover Rivers State and occupy the Brick House come 2023