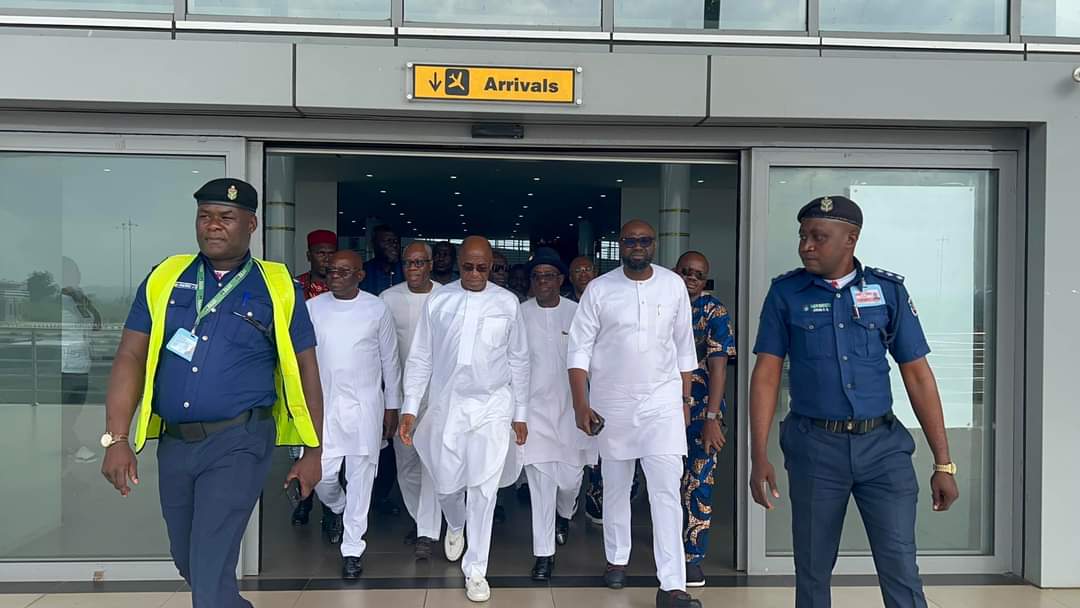 Erstwhile National Publicity Secretary of the defunct New People’s Democratic Party (nPDP) and chieftain of the All Progressives Congress, Chief Eze Chukwuemeka Eze says the conferment of the ‘Distinguished Achiever on Infrastructure (Federal)’ award on the former Minister of Transportation, Rt. Hon. Chibuike Rotimi Amaechi, is well deserved, given the giant strides he made from his sterling performance during the period he held sway as Nigeria’s Minister of Transportation.

In a statement made available to media houses in Port Harcourt, Eze who is a member of the APC Legacy Projects Media Team hinted that the award which was conferred on the former Minister by President Mohammadu Buhari, in a ceremony to mark the maiden edition of the Nigeria Excellence Award in Public Service at the Presidential Villa, Friday, had 44 notable Nigerians, including former President Goodluck Jonathan, Govs. Dave Umahi (Ebonyi), Yahaya Bello (Kogi), Hope Uzodinma (Imo), Babajide Sanwo-Olu (Lagos), Aminu Tambuwal (Sokoto), Nasir El-Rufai (Kaduna), Ben Ayade (Cross River), Nyesom Wike (Rivers), Dapo Abiodun (Ogun) and others as recipients.

Commending President Mohammadu Buhari and the organizers of the ceremony for rewarding competence, Eze said it is almost customary to nominate the former Rivers Governor for National Honours, given that his flair for excellence in public service which is traceable to his days as Speaker of the Rivers State House of Assembly is a public knowledge and speaks for itself.

Unlike those who spent millions of public fund to lobby for slots and recognition and mobilized hundreds of people to Abuja to squander Rivers money, Eze highlighted that the award given to Amaechi was meritorious given the cornucopia of achievements recorded under his watch all of which stand as legacies of the APC administration.

As Governor of Rivers State between 2007 and 2015, his multi-sectorial hyper-performance opened a floodgate of honours from public and private sector players. The transformation he demonstrated in education placed the state on the pedestal of the most educationally advanced in our clime, carving a niche for the city of Port Harcourt on the global map as the first sub-Saharan African City to be named the World Book Capital.

After the 2015 elections, Eze said the urgent need to drive home the long-held vision of holistically transforming Nigeria’s ailing transportation infrastructure led President Mohammadu Buhari to go for a tested and trusted performer, Rt. Hon. Chibuike Amaechi, to drive the process of rebuilding the nation’s transportation sector and within the space of seven years, very remarkable and unprecedented milestones were recorded in the rail sub-sector of the Transportation sector.

Upon his appointment, the party Chief said Amaechi folded his sleeves and got to work. As an experienced performer, he identified rail transportation infrastructure as deserving priority attention among other sectors under the ministry and accordingly, he channeled his energy and expertise in public service in that direction and to the pride of Nigerians, he broke new grounds and made giant strides.

Under Amaechi, the 168-kilometre Abuja-Kaduna rail track was completed and put to use just as the 157-kilometre Lagos-Ibadan stretch was started and completed in record time.

The 327km Itakpe-Warri–Ajaokuta rail line started in and abandoned in 1987 (Over 30 years) was upgraded to a standard gauge and equally completed and put to use under his watch; the 44.7-kilometre Abuja metro line, initiated by the Jonathan government was completed. The Itakpe-Baro-Abuja rail has equally joined the number of rail projects completed under the supervision of Rotimi Amaechi.

Amaechi’s blueprint for the revamping of the Nigerian Railway includes the East-West coastal rail line that will link Lagos to Calabar through Warri and another one from Lagos to the south-east commercial city of Onitsha. Work is progressing at the $3.2 billion 1443km Port Harcourt/ Maiduguri rail line which has the capacity of supporting 60-80km/h freight and 80-100km/h passenger services.

Rt. Hon. Amaechi planed a Trans-African railway that will connect the Lagos-Kano track through Katsina to Maradi, in Niger Republic with schedule to take it across the Sahara to seaports in the Mediterranean countries of North Africa.

Amaechi’s achievements in Seaport and maritime development which brought stability on the waterways and created thousands of jobs qualifies for a documentary.

The former Rivers Governor’s award shelf is decorated with several plaques and trophies from local and international organizations and governments in recognition of his sterling performance.

In 2020, Amaechi bagged the ‘Minister of the Decade Award’ from ThisDay Newspaper. The Sun Newspaper honored him with the Sun Public Service Award (2021) and in 2022 Amaechi, alongside Sierra Leone’s President, Julius Bio, received a continental award from the African Blue Economy Forum, for his verifiable contributions towards the advancement of the blue (ocean) economy.

In a related development, Eze expressed gratitude to God for the successful burial of his father in-law, Late Pa Boniface Okonkwo Nwankwo and prayed God to grant the former Minister, his dear wife, Dame Judith Amaechi and their entire family the fortitude to bear the departure of the great sage.

Eze expressed happiness of identifying himself with such unassuming personality, a rare gem, visionary, workaholic, great achiever, humane and embodiment of excellence like Amaech whose traits of record is a great honour to this nation