Eze to Wike: State Reception for an Aircraft, Embarrassing to the Collective Sensibility of Rivers People 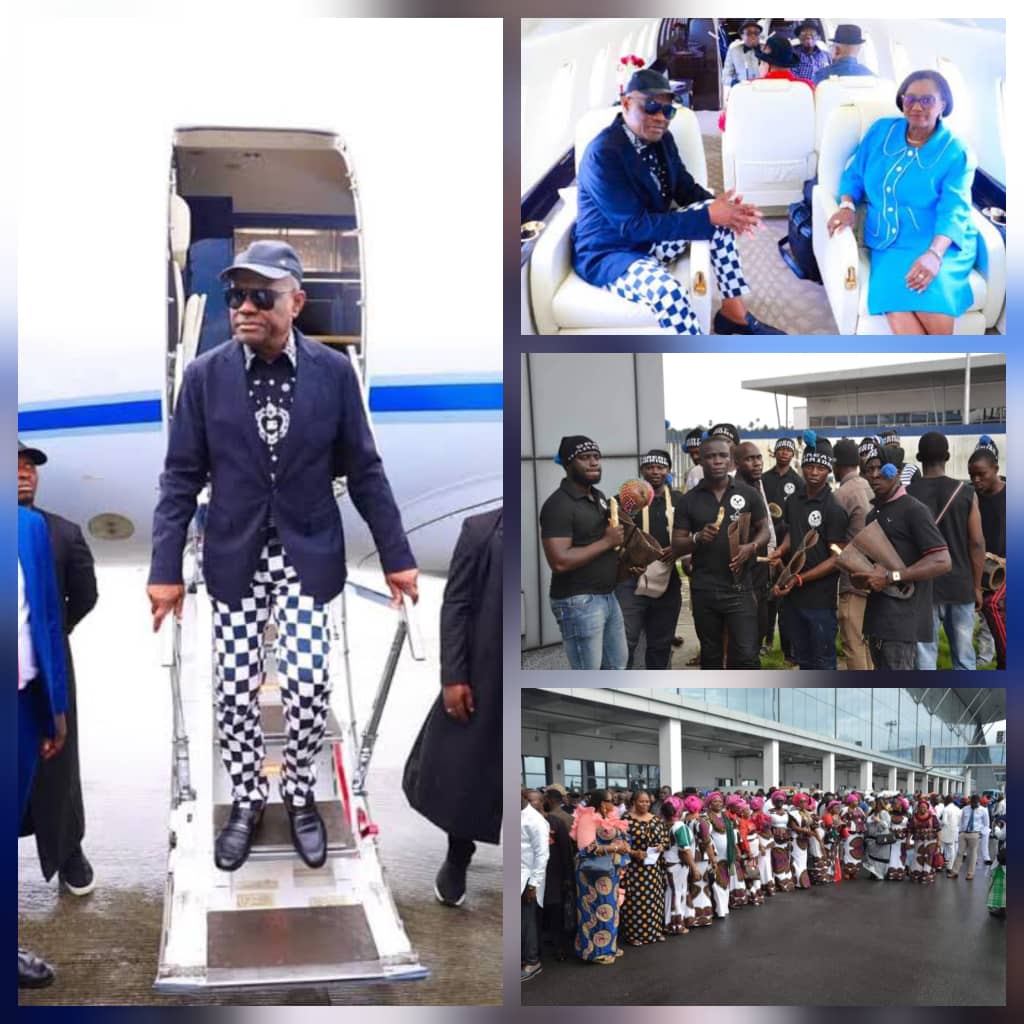 A stakeholder in the All Progressives Congress and erstwhile National Publicity Secretary of the defunct New People’s Democratic Party (nPDP), Chief Eze Chukwuemeka Eze has expressed a deep sense of disappointment over the showy display and official fanfare that heralded the arrival of Legacy 600, a Rivers-owned aircraft that was flown to, and has been under the safe custody of the General Atomics Aerotec in Munich, Germany for repairs/maintenance under the immediate past administration of Rt. Hon. Chibuike Amaechi.

In a statement made available to media houses in Port Harcourt, Chief Eze said the cost of maintenance hampered efforts to refurbish and showcase the aircraft for sale and/or return it to the state because having failed the test of airworthiness, it is against safety rules to fly the legacy 600 back in its bad condition and as a matter of fact, efforts were still on course by officials of the state government under the former administration to conclude arrangements with the Company under whose custody it was in Germany, to sell it off and channel the proceed to some more productive ventures before the administration ended in 2015.

Eze recalled that the State Government then, signed an Aircraft Sale Broker Agreement with ACASS, Canada Ltd. George Tolofari who was Transport Commissioner at that time signed that agreement on behalf of Rivers State Government while Andre Khuri, President of ACASS Canada, signed on behalf of the company and till this day, the records are there.

Reacting to the ‘State Reception’ organized to welcome the legacy 600, a mere aircraft, by the government of Rivers State in this modern century, Chief Eze said it is grossly embarrassing to the collective sensibility of the lettered Rivers public to bring the state so low by dragging revered traditional rulers and elders to the airport and compelling them to gaze unto the heavens in anticipation of the arrival of an airplane in an unjustifiable bid to score some cheap political points, adding that even when the first aircraft landed in Nigeria, the country was not thrown into such a moment of embarrassment.

In fact, the congregation at the airport to ‘welcome and cheer up’ an aircraft is crude and depicts a hubristic display of mental poverty on the part of the Governor and his cohorts who have only succeeded in painting the state and her very enlightened populace in the light of those still living in the Stone Age.

Eze says it smacks of laziness, poverty of ideas, avarice, deceitful cunning, dupery and a perceptible tincture of craft and guile for Governor Wike to use every little opportunity to reap the state of humongous sums in furtherance of his fanfare of squander mania.
“If it were not so, what would prompt a ‘State Reception for an Aircraft?” The party Chief queried, maintaining that both the Governor and the aircraft are liabilities that must be disposed off by 2023.

More worrisome is the Governor’s claim that a whooping 3million Euros have been spent just to return the aircraft that is bound to create further liability to the state.

He noted that no business-oriented human uses his money to purchase liability. And where it eventually happens by mistake the perfect option is to dispose of it to close every loopholes that will milk you further.

Eze dismissed claim by the Rivers State Governor that no record existed about the whereabouts of the said aircraft which he said only came to the knowledge of his government through ‘intelligence report’.

Describing the falsehood peddled by the Governor as terribly discordant with available records, Chief Eze said as Chief of Staff to Gov. Amaechi, Mr. Nyesom Wike is sufficiently stocked with every information and is knowledgeable about every decision and actions taken in respect of critical issues of public concern during the Amaechi administration including the decision to fly the said Legacy 600 to Germany for refurbishment and sale after the administration acquired a new airplane which Wike uses today as Governor.

The whole arrangement was made in 2011, before Gov. Amaechi sent his name to Jonathan for ministerial appointment which became official on July 14, 2011. One could easily deduce that by the time the aircraft was flown to Germany, Wike was part of the government and knows virtually everything on the subject matter and his public denial is grossly irking.

In 2015, while addressing a press conference in government house, a few months after his inauguration as Governor, Mr. Wike announced that he was sending a delegation to Germany to ascertain the state of the said Legacy 600 and negotiate the possible path to return it to the state.

From 2015 when Wike sent his fact-finding delegation to Germany, to 2022, is almost seven years and in his state of cluelessness and defective sense of reasoning, he thinks he can wake up any day and fabricate fictitious points just to make headline. Obviously, Wike and his group are still living in the 19th century.

The Legacy 600, it’s movement and domicile in Germany are all contained in the handover note of the Ministry of Transport prepares at the end of the Chibuike Amaechi administration in 2015, contrary to claims by the Governor. These facts have earlier been buttressed by George Tolofari, who served as Commissioner in that Ministry in the previous government.

It is therefore unfortunate and disturbing that reasonable humans gathered at the Port Harcourt International Airport on Tuesday 27th to salute liability.
Traditional rulers, cultural dance groups, Federal and State Lawmakers and top government functionaries all congregated in the sun performing and singing praises to impress and massage the self-glorification of Gov. Wike who has surpassed his contemporaries home and abroad by bringing home a humongous liability at a time when responsible governments are striving hard to limit every drawbacks and incommodity to advance their economies and improve the livelihoods of their people.

Just the other day, Lagos took delivery of 22 train coaches for the blue rail project targeted at absorbing thousands of Lagosians under its employ, ease transportation and travel time and add to the ecstatic feeling that accompanies the sight of the beauty of Lagos. There was no noise, no state reception for those massive economically viable assets. Nobody was paid to gather anywhere to sing praises to Gov. Sanwolu. Yet, under a paid live-media-coverage, people gathered in Port Harcourt to welcome a third class aircraft purchased over two decades ago under the administration of former Governor Peter Odili. That shameful reception just gulped some more millions of Rivers money and that is wasteful.

One would have loved to see a situation where the Governor continues with the arrangement of selling off the aircraft as initiated by the Amaechi administration, and use the money to create jobs and empower the youths, but the Governor instead, preferred to be wasteful because an opportunity to loot has presented itself and thus, he siphoned more billions on the aircraft to prove a point that is neither here nor there in the pursuit of his selfish, private vendetta.

Now that the aircraft has landed Port Harcourt under a luxurious fanfare, what else? What do Rivers people stand to benefit? Aside from the monetary reward given to those who gathered at the airport to salute the legacy 600, what business do they have with the aircraft? Did the legacy 600 convey each one of them to their various destinations? Will the legacy 600 be made available anytime they need it for their travel needs? What was the nuisance really all about? Has it solved the hyper-unemployment that has placed Rivers topmost on the nation’s unemployment index? These and many more beg for answers.

Chief Eze called on the state government to quickly consider leasing/selling off the Legacy 600 aircraft to Akwa Ibom State, where Gov. Udom Emmanuel has converted the fleet of his state-owned aircraft into an airline company -‘ Ibom Air’, a laudable initiative that has created jobs in thousands and is currently adding significantly to the economy of the state; or better still to Ebonyi State, where Gov. Dave Nweze Umahi is building an international airport and would be needing aircrafts to also begin a state-owned airline company to create jobs for his own people of Ebonyi.

The party Chief appealed to Rivers people to be a bit more patient with the nuisance pervading the state, stressing that in a matter of months, the vexatious ruffle will be over and sanity, civility and respect will be restored to the seat of power with Pastor Tonye Cole as Governor.