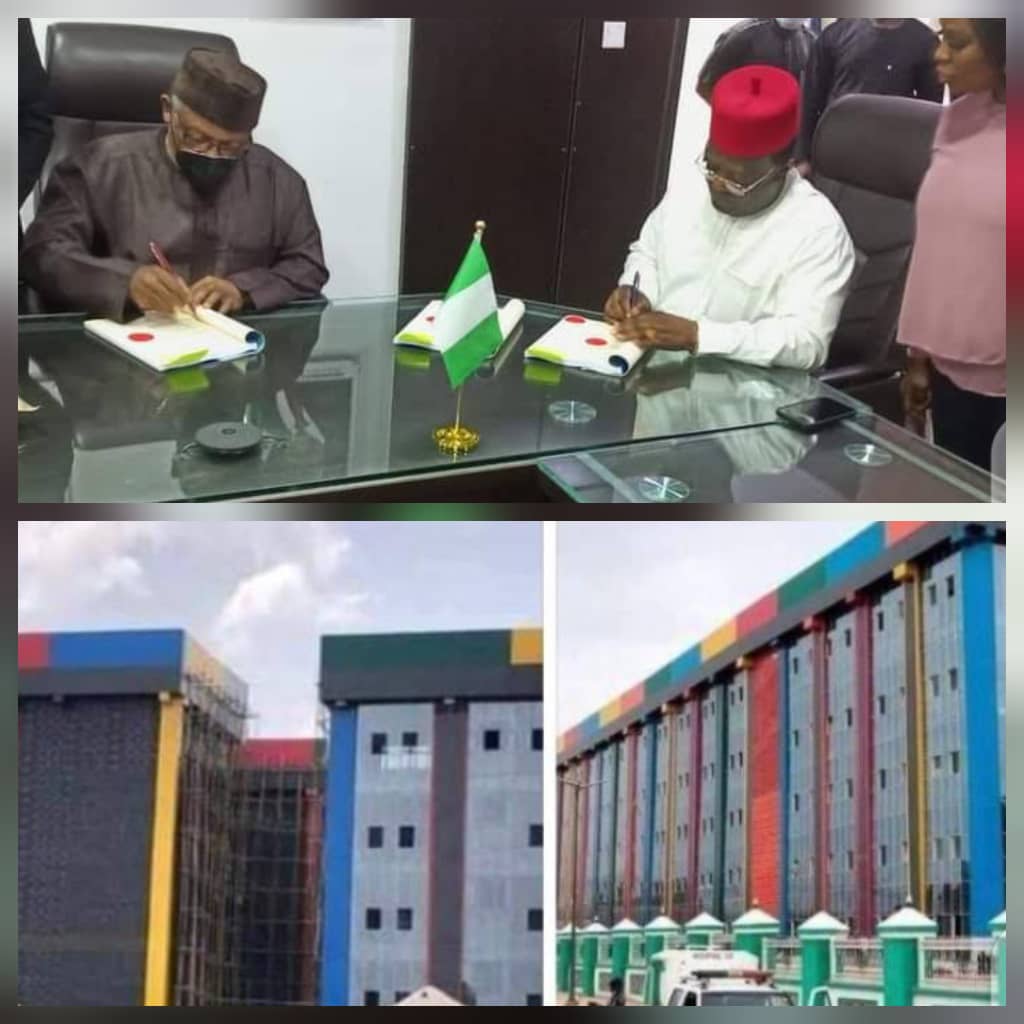 In a statement made available to the media in Abuja, Eze recalled that during the two day visit of President Muhammadu Buhari to Ebonyi State on 5th and 6th May, 2022, the President was visibly awed by what he saw during the commissioning of the Ebonyi’s King David University of Medical Sciences and thus without hesitation, acceded to the request of the Ebonyi State governor for the Federal Government to take over the running of the University.

Eze quoted Governor Umahi as stating, “This hospital is beyond the scope of any State government to run and we have been celebrating your approval of our request and are very proud that you are here to commission it yourself”.

In this regard, President Buhari assured that the Federal Government would take over the management of the University of Medical Sciences, located in Uburu, Ebonyi State, as a Federal Medical University.

The President told the people of Ebonyi that the process for the change of ownership of the university is on and would be concluded soon.

The actualisation of the dream and vision of the Federal Government taking over this gigantic innovation was achieved on 6th September, 2022 when the Minister of Health, Osagie Ehanire and Ebonyi State Governor, Dave Umahi, signed an agreement for the Federal Government to formally take over King David University of Medical Sciences pursuant to a presidential promise by President Buhari in May this year.

In a ceremony held in the conference room of the Federal Ministry of Health, Abuja, a memorandum of understanding (MOU) to that effect was signed thereby sealing the takeover process.

Speaking at the ceremony, Governor of Ebonyi State said the idea of the university was borne out of the desire to save the life of the people, serve them well and stem medical tourism.

“Apart from the huge revenue we would save from our people traveling abroad, we would be bringing world class medical services home. That way, we are saving the lives of our people and earning foreign exchange from the foreigners coming for treatment” he said.

Governor Umahi further explained that the beautiful university environment was beyond what a state could manage prompting the president, who commissioned it in May, to pronounce the takeover by the federal government.

Corroborating the statements of the governor, the Minister of Health, Osagie Ehanire, said the Federal Government had to take over the university because of its strategic importance to the overall healthcare plans of the federal government.

“The institution is very ready and well equipped with state of the art facilities. We have confirmed the standards and we are very excited to be taking it over. I will soon be there to physically take it over,” Minister Ehanire said.

The ceremony was witnessed by the Minister of State for Health, Barr. Joe Ekumankama, the permanent secretary of the ministry and several directors of the ministry.

On the side of Ebonyi state were some commissioners and top state government officials.

Throwing more light about the University, Eze stated that the emergence of the University of Medical Sciences that has been adjudged by NUC to be the most beautiful, is going to be a centre of excellence for the treatment of those terminal diseases that normally take people out of the country.

Eze, a member of the APC Legacy Projects Media Team (ALPMT) who took a tour of the University before the arrival and commissioning of the project by Mr. President in May further highlighted that the university will go a long way to end foreign health tourism which is the objective of the huge investments in establishing and unveiling as a world class medical University with sophisticated blend of contemporary health and modern education by Governor Umahi.

The fact remains that this University is a Centre of Excellence in cancer management, kidney transplant with dialysis centre, liver transplant, and other diseases management and treatment facilities. It has the latest diagnostic equipment that can be rated amongst the best anywhere in the world. The technology to be employed is equally second to none.

The centre is manned by the best hands anywhere in the world and the structures are classic. The diagnostic equipment came directly from the manufacturers and is ready for use. It’s going to be a centre of medical tourism and it will attain the international status of such a big institution. For this, power supply will be 24 hours as it would have power from solar, generator, and national grid.

The vision behind the establishment of David Nweze Umahi University of Medical Sciences is to halt and reverse medical tourism abroad; halt and reverse capital flight due to medical treatment and management of high calibre diseases; provision of access to ultramodern medical equipment and personnel and to expose our medical students to the best training facilities available in the world.

The University rated as the best Medical University and Centre of Excellence in Medicare in entire Africa, has commenced operations with the production of some scarce sensitive hospital necessities.

Within a few months of the take-off, the University established a feat of becoming the first University in Nigeria to commence the building of an Oxygen Production Plant. According to the Vice Chancellor of King David University of Medical Science Uburu Ebonyi State, Professor Jessy Uneke, the institution has commenced the building of an Oxygen Production Plant to stem the dearth of the product in hospitals and schools in the country.

The University commenced 2021/2022 admission of Students in all 17 Programmes recognized and approved by the National Universities Commission /NUC. Professor Uneke further disclosed that the University was the first to start 17 courses at the same time in Nigeria and was using Ph.D Holders to start the University. There are additional four courses that the institution would equally commence in no distant time.

Dialysis Production Plant is being constructed and it would be done between December 2021 and January 2022. In dialysis there is a special kind of consumable called Dializer for Liver and Kidney Transplant.

Professor Uneke said that the University was formally recognized by the National University Commission (NUC) on 7th July 2021. He said; “When the NUC came for Resource Verification and after assessing the resources we had the privilege that 20 of our 20 Departments presented were all approved. Twenty of the Departments were running 17 Programmes, we also have all the 17 programmes approved.”

The University has Special Centres including Cancer Centres, Kidney, Eye Centres, and Sports. “We want to provide a conducive learning environment.”

EBONYI: List of School Fees Amount as Recently Slashed According to Departments In University of Medical Sciences