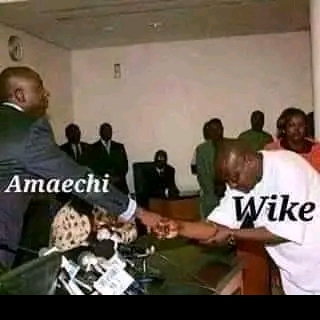 Through him by 2015 Senator Magnus Abe, Senator Andrew Uchendu and a couple of Federal and State Law Makers were duly elected and we know the inputs these leaders made to the development of Rivers State.

The above doesn’t make any meaning? Ok. Through the said failed leader, Nyesom Wike Dr. Dakuku Peterside, a great son of Rivers State was appointed the Director General of NIMASA and the magic he did, excelling under NIMASA will take twenty other Directors-General to achieve what he did. Many Rivers State sons and daughters are today working in NIMASA but Amaechi has not contributed anything to the development of Rivers State. No wahala, God dey!

Hon. Asita, another great son of Rivers State was appointed the Chairman of NIMASA Board through the instrumentality of the failed Amaechi

From 2015 till date, Dr. Davies Sonkote, Hon. Brown Onari were and are key players in NPA . Today through these great leaders, Amaechi influenced many sons and daughters of Rivers State to be employed in NPA

Today, Hon. Odum Udi through the failed Amaechi is a Minister of the Federal Republic of Nigeria.

I learnt also that Alabo Sam Jaja whom he know worship as a god through the failed Amaechi is still a member of a Federal Board.

It is also on record that the following great sons of Rivers State Prince Chibudom Nwuche, Chief Victor Giadom, Hon. Aso Wenah, Fred Igwe, Dr. Lawrence Chuku and countless others due to the influence of the failed Amaechi are all members of one Federal Board or the other

The one that gives the Governor sleepless night is Prof. Henry Ugboma, the CMD of UPTH an unassuming and smooth operator who has employed more Rivers State sons and daughters than those employed within the seven miserable years of Gov Wike as Governor of Rivers State state.

“Many people may not understand the special bond and relationship between Wike and I which causes me to weep most of the time whenever I listened to him speak in public functions. The fact remains that from the look of things either Gov Wike needs to go back to school to read and understand what true development means or those crowding him should be bold enough to help him to understand that human development is the highest level of development in any given state which positions Amaechi ahead of him and those cheering him in his most despicable acts against humanity” Eze stated.