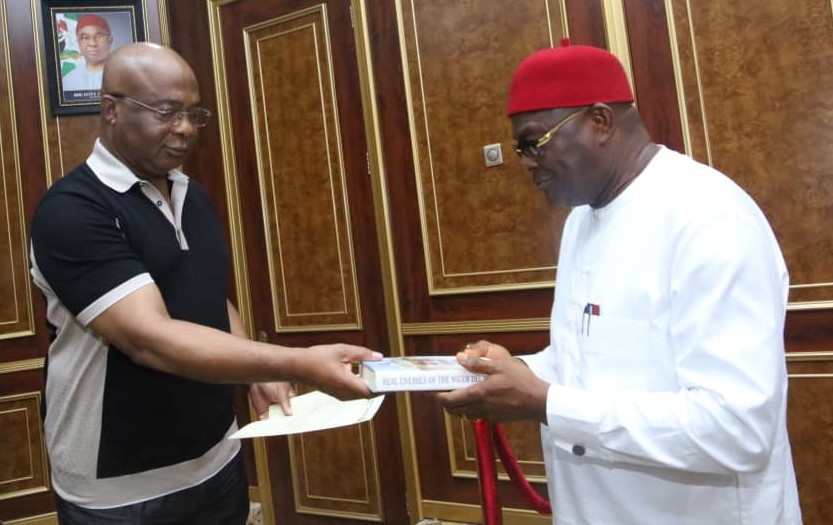 Niger Delta Development Commission, NDDC, has handed over essential drugs to the Imo State Government for distribution to health centres in communities affected by flood, as part of measures to ameliorate the suffering of the people in the Niger Delta region.

Handing over the drugs to the Governor of Imo State, Senator Hope Uzodimma, at the Imo State Government House, Owerri, the NDDC Acting Managing Director, Engr Emmanuel Audu-Ohwavborua, said that it was part of the Commission’s efforts to improve health services in the rural communities of the Niger Delta region.

The NDDC Chief Executive Officer, who was accompanied by other directors of the Commission, presented the list of the drugs, already delivered, to the governor. He also presented a copy of his book, entitled: “The Real Enemies of the Niger Delta,” to Governor Uzodimma.

Audu-Ohwavborua assured the Governor that the NDDC would be fair in the distribution of projects in the Niger Delta states, noting that the Commission was making efforts to provide relief materials to flood victims in the region.

The NDDC boss explained that the Commission was concerned by the pains of the Internally-Displaced Persons who were exposed to poor hygiene and increased risk of disease outbreaks.

He said the essential medications, which would be made available to the other NDDC mandate states, included anti-malaria, anti-biotic, anti-fungal, anti-diarrhea and anti-emetic drugs. Others, he said, would address the challenges of diabetes, hypertension and general fever.

Responding, Governor Uzodimma, said he was delighted that the NDDC was taking appropriate actions to address the challenges facing the people of the region, noting that the Acting Managing Director was “able and capable.”

He remarked: “The Acting MD knows the terrain of the Niger Delta region very well and over the years, he has shown capacity. With him in the saddle, I expect positive changes in the NDDC.”

“Under your watch, I expect the NDDC to go back to fulfilling its mandate by executing projects the touch the lives of the people.”

The Governor appealed to the NDDC to pay its counterpart funding to the Livelihood Improvement Family Enterprises, LIFE-ND, programme, which is partly funded by the International Fund for Agricultural Development, IFAD, to make it possible for Imo State to benefit from it.

Uzodimma called the attention of the NDDC to the dilapidated section of the Owerri-Port Harcourt Road at the boundary between Imo and Rivers States. He said that some emergency measures should be taken to ease the pains of commuters between the two states.

Reacting to the Governor’s concern, the NDDC boss said that the Commission would send its engineers to assess the situation and come up with a more enduring and holistic plan for the road.