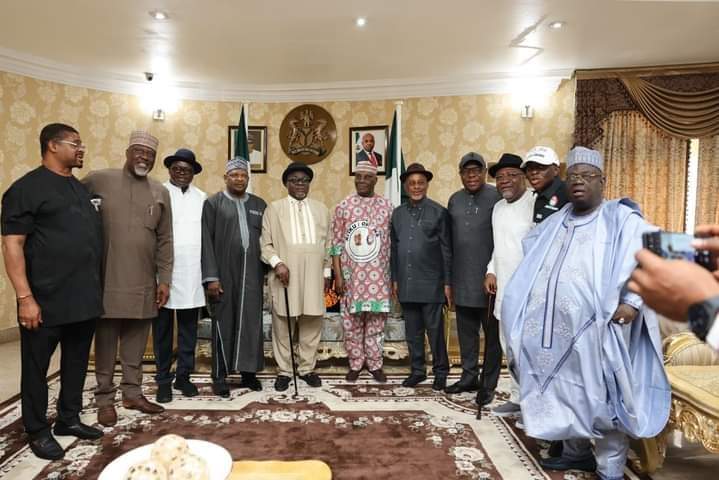 Celestine Omehia has again appeared in a photo pose with the presidential candidate of the Peoples Democratic Party, Alhaji Atiku Abubakar on Monday despite his disagreement with his governor Nyesom Wike

Nyesom Wike who had disobeyed the supreme court ruling over the matter between Amaechi Vs Omehia, that failed to recognize Celestine Omehia as one time governor of Rivers State. Instead Nyesom Wike at assumption of office as governor had disagreed and placed the portrait of Celestine Omehia among the former Governors of the state.

Wike went further to recognize Celestine Omehia as his Excellency, a title for governors and former governors. He also began payment of entitlements to Omehia to the tune of 600milion naira according to the governor, including 96.5million naira pension

However, Political disagreement on who to support and not has creep in between Celestine Omehia and Governor Nyesom Wike. Wike who failed the PDP presidential primaries to Atiku Abubakar have not shown any support to the winner, whereby forming his own group with few other governor’s including Ortom of Benue State, Ikpeazu of Abia State, etc has maintained that anyone around him must dance to his tune or have him to contend with. He have said this in different public function in a live TV

A situation which did not go well with Nyesom Wike. Since then, the governor have taken it upon himself to fight back with series of efforts to either nail the men or make them have a U-turn.

The governor had also on Friday signed a bill Derecognising Celestine Omehia as former Governor and demanded for a refund of all money paid to him within the period within one week or face the battle.

In what looks like daring the governor, Omehia and others from Rivers State have again on Monday appeared in a picture pose with Atiku Abubakar as they prepare for their party function in Akwa Ibom state against the wish of Nyesom Wike who have boycotted the said event