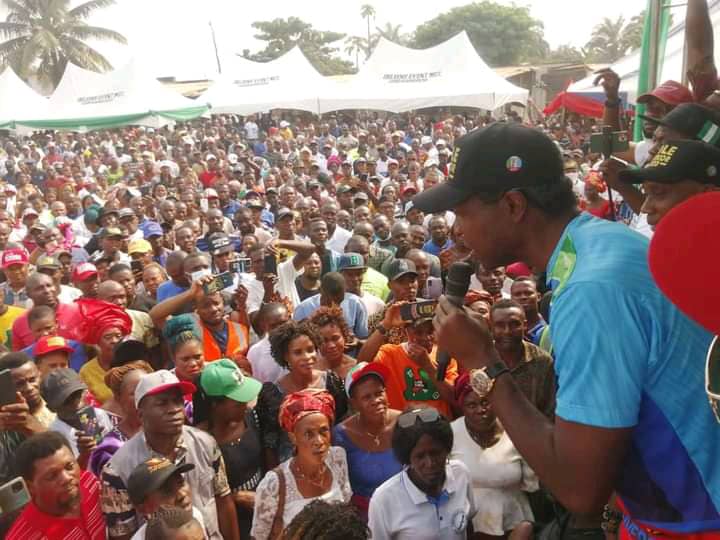 Pastor Tonye Cole the Governorship candidate of the All Progressives Congress APC Rivers state on Tuesday assured people of Etche of speedy development if elected and sworn into office come May this 2023.

Tonye Cole gave this assurance while flagging off his campaign exercise in Chokocho in Etche Local Government area of Rivers State. He stated rhat it’s sad Etche being one of the local government areas that has contributed to the economic strength of the state, will be relegated and deprived of development because of politics.

According to him, “Because you have chosen to affiliate with us, the State Govt has denied you what is rightfully yours”.

“I am here to assure you that your steadfastness will not be in vain.

Tonye Cole revealed that the current Governor Nyesom Wike and the PDP had tried every means to ensure that APC is not on the ballot but failed. After failing in the courts they tried a different option of executive orders to stop them from campaigning.

“They came and lied that we would not be on the ballot, they said INEC will not recognize us. But we are here on the ground to tell you that we are on the ballot and we are campaigning”.

On his part, Emeka Beke, the APC chairman in Rivers State who appealed to the people to get their PVC, also said,

“I am speaking as the chairman of this party; God has told me we are going to win this election”.

Speaking on behalf of other flag bearers for the State and national assembly, the Senatorial candidate representing Rivers South East, Engr. Ndubuisi Nwankwo promised that if elected, they are going to use their offices to canvas for the development of Etche and Rivers State at large.

Also featured was a visit to the paramount ruler of Etche land, as they further visited the popular etche market for sensitization

Media and Strategic Communications Directorate, Tonye Cole Gubernatorial Campaign Council were on ground and reports that it was a huge success as they look forward to proceed to another LGA in the next day

Legacy Projects Will Be Our Focus ~ NDDC MD