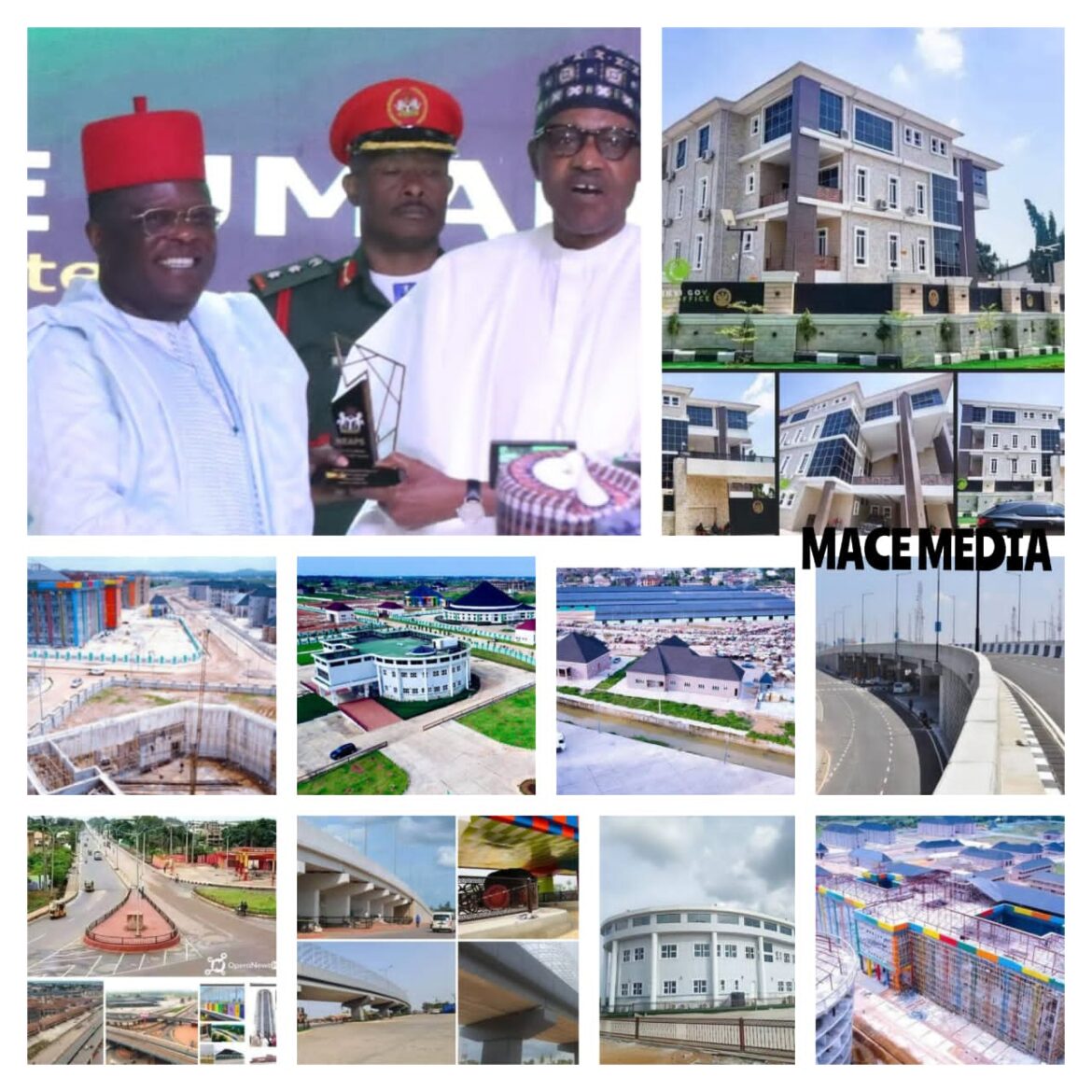 Chieftain of the All Progressives Congress and erstwhile National Publicity Secretary of the defunct New People’s Democratic Party (nPDP), Chief Eze Chukwuemeka Eze has described the award bestowal on the Governor of Ebonyi State, Engr. Dave Umahi, as Nigeria’s Distinguished Governor on Project Innovation, by President Muhammadu Buhari, as well merited and a call to others who occupy public offices to strive towards selflessness in the discharge of the responsibilities of such offices.

Eze a member of the APC Legacy Projects Media Team whose major function is to highlight and expose to the world some of the key and Legacy projects executed by the APC Federal and State Governments across the board
In a statement made available to media houses in Port Harcourt, Eze said Governor Umahi one of the key member of the APC belongs to the class of the latest recipients of national honours in the category of Commander of the Order of Niger (CON) was again nominated for the Nigeria Excellence Award in Public Service given the masterful innovation and transformation his passion for service has brought into Ebonyi State.

He said for Governor Umahi to be bestowed with two national awards within the space of one month, his place in history as one of the exceptional and extraordinary Leaders of this dispensation is sacrosanct.

“Umahi was recently honoured by the President of the Federal Republic of Nigeria, Muhammadu Buhari with the National Honours Award of Commander of the Order of the Niger, CON, in recognition of his sterling leadership qualities and unequalled track record of performance as Governor and one month after, he was again bestowed with a national award as a distinguished Governor on innovative infrastructure Award”.

The honour speaks of his hallmarks in the innovative transformation of Ebonyi State from a sorry State to a State of Glory and Honour.

Eze listed some of the projects that earned him the award as the most innovative Governor of this dispensation below;

Construction of one of the best International Airports, 16 quality and well constructed Flyovers, 600km concrete pavements and concrete roads across the width and breath of Ebonyi State, biggest and best shopping mall in Africa and the State Ecumenical Centre a
place of worship for God that can take over 5,000 crowd. Construction of one of the best State Government House in Abuja.

Other infrastructural feats of Gov. Umahi include David Nweze Umahi Federal University of Medical Sciences, President Muhammadu Buhari International Airport, the State and the light tunnel, the network of solid road which has made Ebonyi State a global village, the new Government House which depicts the new status of the State, the numerous long span twin flyovers and the synthetic street lights, roundabouts, water fountains and dualizations that inspire the state’s economic possibilities, the array of agricultural, commercial, educational, health care and human capital development intervention projects established to rewrite the history of the state and her people.

Eze said it is on record that virtually all the roads within the metropolitan areas and and small towns have been constructed in concrete pavement with beautiful roundabouts, street light and water fountains built to spice the beauty of the state and enhance tourism.

As a way of policing the environment and detecting crime, the party Chief said CCTV cameras have been installed in major junctions and that strategic and innovative security initiative in crime fighting is already yielding results in Ebonyi State.

Eze recalled that he left Ebonyi State some months ago after the departure of President Muhammadu Buhari who was in the state to inaugurate some of the classic projects of Gov. Umahi some of which include – the best Medical University in Africa- the King David University of Medical Sciences, Nigeria Best Ecumenical Centre, Saint Margaret Umahi International Market, Nigeria most outstanding Government House, some flyovers, parts of the Ebonyi International Airport, among others.

All of these achievements made to the pride of the good people Ebonyi state have gained national recognitions and thus the state, among other recognitions was ranked the most prudent state in the use of public resources in Nigeria (Budgit Office 2021), the best state in capital budget implementation and investment in capital projects and best State in Nigeria in Economic Growth (Budgit Office 2021); Ebonyi was ranked 2nd Best State in 2021 overall Fiscal performance rating (Budgit Office 2021), the least indebted State in South East (and 3rd least in Nigeria) (Budgit Office 2021), the 4th best in investment towards self reliance (Road to State’s viability), above average in maternal mortality ratio (2018 World Bank State of States Health index), one of the 10 best states in Economic Development performance (Philips Performance Index of the year 2020), one of the 5 best States in Nigeria (2020 State Fiscal Sustainability Index), One of the largest producers of Rice in Nigeria in the year 2021 (Federal Ministry of Trade and Investment) and the 2nd best in Empowerment and Job Creation in South East according to the National Bureau of Statistics, 2020.

Awed by the very many achievements, Eze said if Gov. Umahi could within less than eight years of his reign, turn Ebonyi State, hitherto known as dusty, most backward and epicenter of guinea worm, into the fastest and one of the most developed State in Nigeria with a touch of class, then states with higher IGR and FG allocations should have been competing with Dubai. “A visit to the new Ebonyi Government House is a tour to the wonderland”, he noted.

Today, Ebonyi State stands out as one of the State in Nigeria with concrete roads linking all the Local Government Headquarters. While almost all the States are engulfed with one security challenge or the other, Lady Monica said Umahi’s pragamitic approach to leadership has ensured the security of lives and property of citizens, residents, investors and even visitors.

Eze congratulated Gov. Umahi and urged the people of Ebonyi to continue to accord him the massive support he currently enjoys in order to consolidate the gains of his administration after 2023.